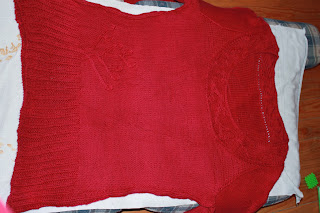 It feels like it's been forever since I last posted, but there's been a lot going on.  Expecting a third child takes just as much, if not more, preparation than having the first or second.  The good thing is that I have plenty of clothes, no matter what the gender.  I've been working on a crochet commission project, and hope to have pictures of that soon.

I've ripped back my Skelf, mainly because the shoulders kept falling down, and it was annoying to be wearing it and pulling at it all day.  You can see my project page here.  I'm going to actually do what the book suggested, and knit it based on my actual measurements, rather than just pick a size that seems close to the size I want.  Ysolda is so smart that way.  But, before I can cast on, I have to take said measurements.  There's a lot of them to take, but once I have them, I can translate them to any pattern.  Like my Oatmeal pullover, that's still sitting in the floor of my closet unfinished.  I think it's going to be a long, hard winter this year, and I want to be prepared.

I'm also horribly behind on socks.  I have 49 days until Christmas, and I still have 2 and a half pairs left to go.  Well, I have almost to the heel on the second sock done, so maybe 2 and 1/3 pairs?  In any case, I have to get busy.  I think I'm over being tired so much, as I'm headed into the second trimester.  Wish me luck!  What are you working on?  Please share!
Posted by Angelfire212 at 6:32 AM

I'm impressed that you knit socks for gifts! I'm sure I'd give up for lack of time.

So, when are we going to see you again at knit night?