Recently, I went looking for some items in our storage unit.  I was convinced that they were there.  I must have been wrong, because I didn't find them there, or at least I didn't see the boxes that I thought would have contained these items.  I was looking for a couple of personal items, one of which was a box of contacts that I know I have.  I thought when we moved that I had put them in one of my bags, and they would be with me when we arrived.  I also thought I had put my alarm clock in there, but I haven't found that either.  As I searched through the boxes, I found this: 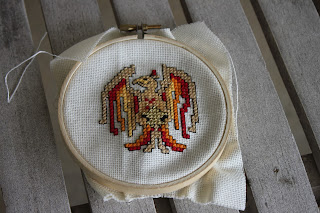 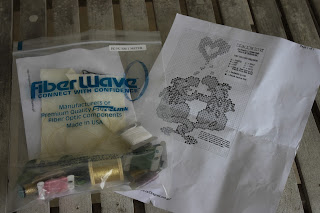 And some of these: 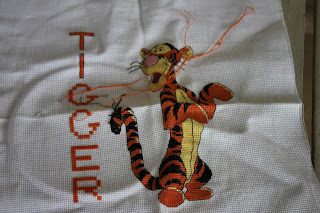 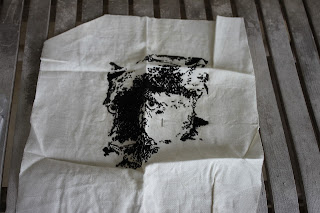 And now I am completely sidetracked.  I'm still working on my sweater, but I realized how close I was to finishing this one, that I couldn't help myself.

So, I started working on it.  A dear friend of mine had asked me to make this for her now husband ages ago, and I agreed, and then life happened.  They got married, I finished my degree, I got married, they had two children...you get the idea.  So now, I'm working on it.  It has gone a lot faster than I remembered embroidery going.  Maybe it is because I see that light at the end of the tunnel.  Maybe it is because it is something different.  Maybe it's not going any faster, but I think it is.  I do enjoy it, but it is not as portable as knitting or crocheting.  I do remember that much about it.

In the meantime, everyone has been under the weather with some allergy issues, so we took a relaxing week, instead of a regular one.  I did manage to get the sweater split at the armholes: 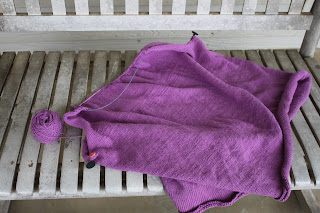 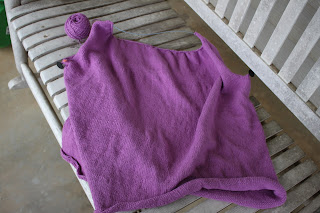 so I still have made some good progress.  I think the only modification I need to make on this is to make them a little bigger.  The pattern calls for 9 inches in the size I'm making, which would give me a circumference of 18 inches.  I was going to increase this, but I slipped it on, and I think the 9 inches will grow enough to make the armhole comfortable.  That's the great thing about a cotton/linen blend - it stretches.  I still have 4 skeins left, which I am sure will be plenty to do the back and two sleeves, especially since the sleeves are meant to be 3/4 length.  Here's something else that's interesting: 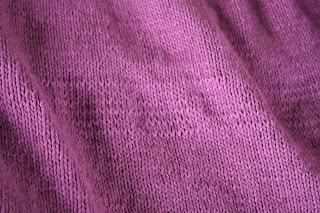 This is knitting and purling in the cotton/linen blend.  Then, I learned to knit backward.  I had heard of it, and was told about it, but never really got the concept.  Until now. 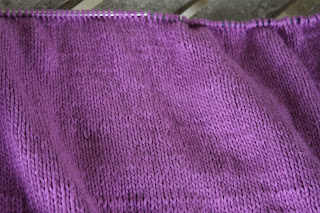 This is right above the top picture.  See how much more even it is?  I have no idea if I'm doing it correctly or not, but it's working.  And as far as I'm concerned, that's all that matters.  It's faster, gives more even gauge, and although it does take a little more attention, it's completely worth it.  I can get through about 4 rows while watching a 45 minute show on Netflix, something like Rosemary & Thyme, Blue Bloods, or while watching an episode of Game of Thrones.

Yeah, I keep up with some things.  Not a lot of trends, but I will say I have read the first book, am reading the second, and have watched the first season, and I'm hooked.  If you haven't watched Rosemary & Thyme, it's a great British murder mystery show.  It's about 2 women who are gardeners and wind up solving murders.  I personally love it.  Then again, my idea of "chick lit" are murder mysteries.  I'm not much one for romance novels.  Too much fluff and not enough plot for my taste - at least the couple I've picked up in the past.  How about you?  Reading or watching anything of interest while knitting?
Posted by Angelfire212 at 5:46 PM No comments: