I have been thinking about my projects, current and past, and the ones I want to attempt in the future.  I have 3 currently in progress, meaning that I'm actually knitting on them actively.  The first is the My Cup of Tea socks, which I tried on last night and they are a bit tight.  Which means that I will probably rip them out and just knit a pair of plain socks for myself.  I could possibly adjust the pattern with some math, but the pattern won't stick in my brain for whatever reason, meaning that I have to keep a piece of paper in front of me.  That sort of defeats the purpose have having traveling knitting.  I want something that I can memorize or I don't have to think about and can pull out at a moment's notice to work on.  I may just "create" my own pattern - use a simple stitch repeat like the Bee Stitch and just get going.  I like something that I can stick in my purse and pull out when I have a spare moment.

I have fewer and fewer of those these days, as I am becoming my husband's personal assistant.  It's not really all that bad - he is just having a lot of doctor's appointments and I am the one who has to coordinate them all within his work schedule.  He's having cataract surgery in August, which is rough because he has to have them one at a time and each eye requires a week off of work.  Most people don't think that's a big deal, but it is when you don't have sick time or vacation, and if you don't work, you don't get paid.  We have to carefully orchestrate everything, and I get to be the conductor.  It's not as exciting as it sounds, I promise.

My 12 Days of Christmas garland got sidetracked, because the color combination wasn't quite what I wanted.  I got about 2/3rds done, and didn't like it.  Fortunately, it's small, so it wasn't that much work.

My sweater is still in progress, but working on the other 2 things means the sweater goes for TV knitting.  And since I haven't been watching much TV these days, there's not much progress on it.  I have split it for the front and back, and am working now on the front.
Posted by Angelfire212 at 1:11 PM No comments:

I am just over halfway done with the purple sweater again. 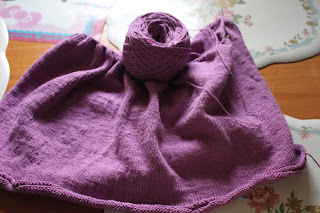 This picture of the first time around is close to where I currently am on it - although the bottom does not curl like it does here.  That should have been my first clue, and at least part of this could have been avoided.

My Cup of Tea socks are coming along - I'm almost to the heel of the first sock.  These are going slowly, since I'm only working on them for a couple of hours on Tuesdays.  Surprisingly, with the help of a handy little sticky flag, I make few mistakes and remember where I am in the pattern.

I am planning a couple of new things to knit, if I can make my fingers work faster.  First up is this: 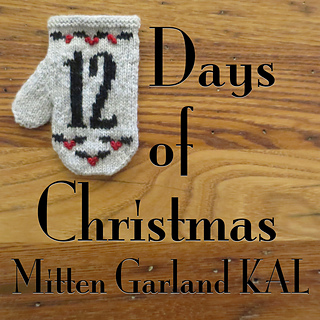 I also think I have a couple of girly sweaters in my head as I have missed birthday sweaters this year.  I picked up some Eco+ in pink yesterday (on sale!) and I think the Littlest Princess will get that.  Princess will get a cardigan from pink and steel grey Sublime I already have.  I'm dying to use it up, as it's really pretty and I don't want it to go to waste.  I still have to work on Little Man's birthday sweater.  I haven't really started even looking at the translation of the pattern yet.  But all things in due time.

I'm already thinking ahead to Christmas as well.  I think I have 3 people down - socks for them.  There is a fourth who might get socks - I don't get any feedback from him on these things so I'm not sure how much he uses or appreciates them.  I think I'm going to do plain vanilla socks for everyone.  First of all, they are easy to knit.  Rather boring, true, but also easy while watching TV or talking.  Having a pattern distracts and if I keep it simple, they won't get messed up.  Also, they go fast because there is no pattern on the sock.  The simple pattern, or lack thereof, also lets me pick a really beautiful yarn to showcase.  I can probably knit a pair of plain vanilla socks in a couple of weeks.  This is great for time saving.

How about you?  Are you already planning ahead for the holidays?
Posted by Angelfire212 at 8:13 AM No comments:

I am not known for cardigans.  I don't think I've ever really had one.  I can't remember having any in high school or college, and now I've knit the body of one. 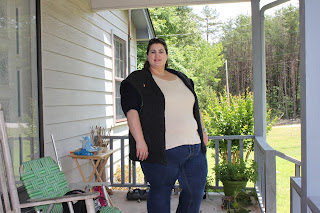 The picture is courtesy of Little Man (I think this next year we'll do more in photography with him in art, and you may see more of his photos).  It hangs low enough, and seems to be big enough around, before the collar.  Also, here's the purple sweater: 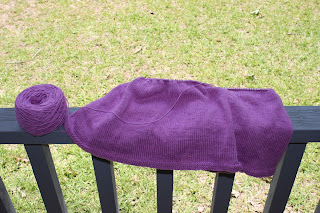 I am on the first new skein, having knit the first 2 of 4 from the body.  I will alternate the old and new skeins for length.  I may get by with only one, but I have an extra just in case.  I thought there were 3 skeins left, but I must have used 8 skeins instead of 7, so there were only 2 extra.  That's okay - I think I can still make it.  Here's the other project I've been working on: 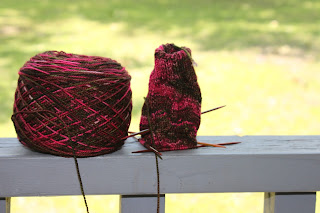 It's My Cup of Tea socks.  I'm using my birthday yarn, Madelinetosh sock in Wilted Rose (hubby knows how to pick good yarn).  These are going slowly, mainly because I only knit them on Tuesday afternoons while at the local yarn shop.  The yarn came from there, and I feel weird about using yarn bought elsewhere when I'm in the shop.

Do you have those kinds of reservations?  I never had an issue where I used to live - I bought a good bit from The Whole Nine Yarns, since I had more money, and it was about 5 minutes from my house.  It was so easy to drive by there on a Saturday and stop in or head over there on Tuesday night and pick up something.  And I did, frequently.  So knitting with something I bought there wasn't a problem.  I usually wanted to knit on the yarn I had just bought anyway.

The yarn shop that's closest isn't that close.  It's a good 30 minutes away, in another town, and it's not as convenient.  And then there's the issue of money.  We have a LOT less.  Like one third of what we had before.  Granted, we no longer have a house payment, but still - it takes a lot of money to support 3 children and 2 adults.  If you had a reduction of your income by two thirds, you'd spend less too, mainly because it just isn't there to spend.  I'm a huge believer in using what you have too, so that's not a complaint, just an observation.  Hubby has bought me a lot of yarn over a couple of Christmases, so I have a large stash, and I like working from it.  Hence the purple sweater.  But I didn't get that yarn at that store, so I feel odd knitting on it there even though it would be the easiest to knit with a group.  And the group here is MUCH smaller than at TWNY.  And I mean MUCH.  This group averages about 5-6 a week, where TWNY averaged about 15-20 each week.  Hey, another third.  In any event, I haven't had the resources to purchase from Bumbleberry (the local shop) like I have The Whole Nine Yarns.  So I try to use what I buy from there, to knit there.  Those projects go slowly, but that's not all bad.  It's actually kind of nice.  How about you?
Posted by Angelfire212 at 3:51 PM No comments: