I asked here, and I asked on Facebook which sweater I should knit.  Here are the choices again:

On Facebook, Iced is winning.  Hubby and another friend (who's a guy) have said Oblique.  Oblique is in second place, and I kind of give a little more weight to the men's opinions.  This is two-fold: one, both men know me really well.  One has been my friend for about 16 years, and the other is my husband.  Second, I had asked the question which one I should knit for me.  Women usually will answer which one they like best, not which one would necessarily look best on me.  The men understand the question and will respond as to which one would look best on me, not which one they like better.  It's a slight difference, but still it should be weighted.

It seems like no matter how much I work on something, I just can't finish it.  I've been working on finishing this cowl: 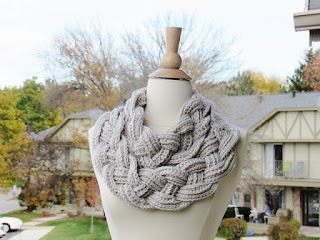 and it seems like it is taking FOREVER.  I am sewing the braids together, so they will stay and not gap.  It's just taking a really long time.  I guess I think I am working on it more than I am, but I also think I should get farther on it than I do whenever I do work on it.  Seaming takes forever, which is why I really don't like it.  I have also been distracted by some socks I found.  I had purchased 2 skeins  of sock yarn a really long time ago to make socks for my brother.  It took me a while (like a couple of years) to finish the socks, and I never touched the second skein.  And I had a part of the first skein left over.  So...I had started another pair, and some how they got lost in the shuffle of stash buying, but they have resurfaced since we moved.  I should be making myself some, but instead, I'm making my hubby another pair.  As much sometimes as I want to be selfish, sometimes I just can't be.
Posted by Angelfire212 at 6:34 PM