My time of day

If I don't get up early in the morning, I feel like my whole day is off.  Ever have those?  If I don't get up before my kids, I feel like I start the day behind.  Even as I type, my first child is waking up and calling me.  Fortunately, he's old enough to get up and climb out of bed all on his own.  Here's my last piece of deadline crochet: 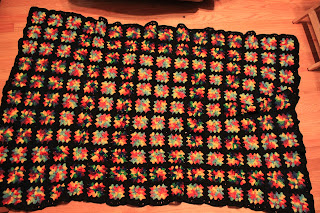 This was a blanket crocheted by someone, and apparently it was sitting for a while and started to come undone. 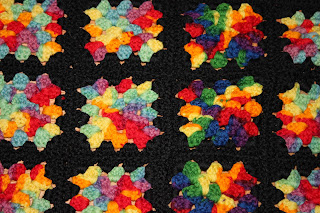 It's made of basic granny squares, the center in bright colors and the outside in black or navy (some squares were in black, while others were in navy).  This became confusing to me, as I was repairing it and at first couldn't tell. :) 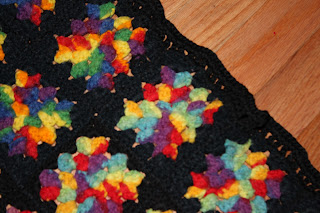 The edging was just a basic single crochet with a double crochet on top of every other one.  I think it was then topped off with another round of single crochet, so it was a basic plain edging.  It was just right for the Technicolor squares.  I was rather impressed with them to be honest - it made something that would have looked appalling and turned it into something wonderful.  It could have easily looked like a clown, but instead, was functional and non-garish. 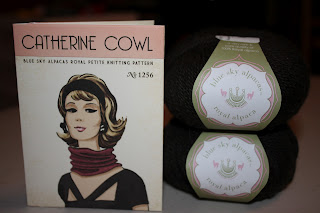 Have you seen these?  Aren't they adorable?  They are from Blue Sky Alpaca, and they are new "vintage" patterns.  These patterns are written up and published as though they are old, but they're not.  They are all new designs and Blue Sky Alpaca has done a wonderful job of packaging.  The yarn you see beside the pattern is their Royal Alpaca, and it's soft and yummy.  The color is a little hard to see, but it's a dark grey with a hint of green.  Kind of an olive-y grey.  This continues the accumulation of Christmas projects - #3.  This one is for my dad, who was left out of last year's knit-apalooza.  I'm trying to get everyone in this year who didn't get something last year.  Maybe one year I'll get everyone with a handmade gift.  But for now, it's one at a time.
Posted by Angelfire212 at 8:04 AM