Thanks to Jolie for posting about my pattern. She's a very cool knitter - very visual in her style. I always like to see what she's working on - it always gives me a new perspective. She takes it beyond function and makes knitting almost geometric in her designs and color work.
I've been keeping busy by working on my January project. I'm trying to work through EZ's Knitting Almanac in a way, using projects I already either have the yarn for or have cast on. This way, I have a goal, I'm using stash, and I'm cleaning out current WIPs. This month is a sweater, and I have been eyeing the Knit Picks Gloss in my stash. I found the perfect pattern from Knitty (Zora) and have been working on it diligently. I don't know that it will get done in January (I have a sweater to repair and a hat to finish for my brother) but there's a good start on it. I'm also making notes as I go, so if I have to put it down in February, I'll know where I am and the modifications I've been making (amazing - I think I've grown up as a knitter). :)
Here are some pictures of what I've already finished this year: 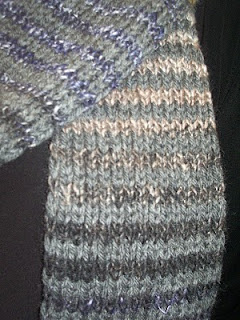 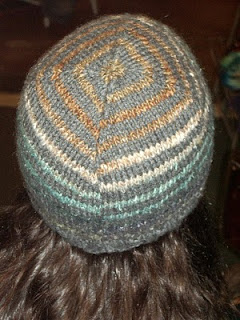 Turn-a-Square Hat from J. Flood (a family of 3 - only mine is pictured here) 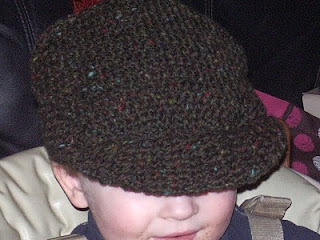 Lidsville from D. Stoller's Son of Stitch & Bitch (Little Man as model - I think I constructed it incorrectly, and plan on fixing it) 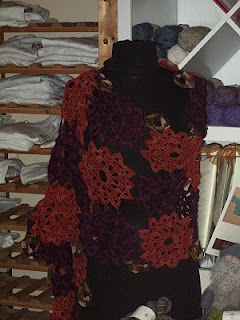 Autumn Sun Wrap from Crochet in Color (shop sample at TWNY)
That should take care of most of what's been going on - other than the holidays, and Little Man's 3rd birthday. I found some pattern errors in Skolnick, so I'll be working on that in the coming months as well. A huge thanks to Jolie for test knitting them for me. I'm still working on confirmation that the recipient of the originals received them - Alex? Hello?
Look for exciting updates coming. Oh, and I decided to participate in the Ravelympics in February. Staying true (somewhat) to EZ's Knitting Almanac, I'm going for the WIP event with Little Man's sweater. I really want to finish it, but the cables are killing me. Maybe this will be the push I need to get it done. Finishing that will also help when I finish Zora, since I'm working both cardigans as one large piece rather than 3 separate pieces as the pattern calls for and having to seam them. I'd rather have the ease of knitting one large piece, keeping my gauge the same, and not having to seam - it's a complete win/win, except when the directions don't work with you.
Posted by Angelfire212 at 6:55 PM